Water From The Rock 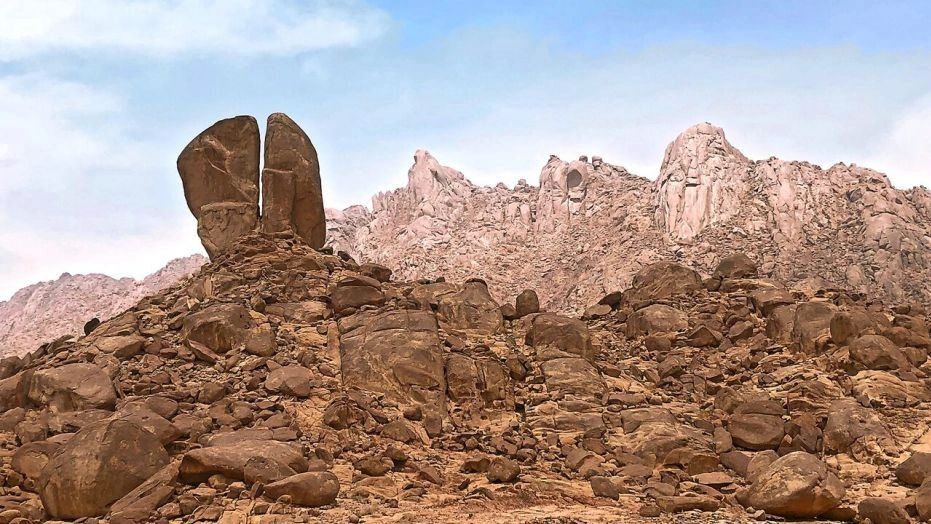 For the next 7 days, we’ll be camped in the first 7 verses of Exodus chapter 17—as we’ve now crossed through the wilderness of Sin, and set up camp at Raphidim.

The place-name Raphidim comes from the same root word concept as does “healing”.  Back at Marah, Yah promised He would be our ‘Rapha’, our Healer—but we can see that the heart attitude of Israel hasn’t healed much since the deliverance at the Red Sea. The same spirits of grumbling, complaining, bitterness, and rebellion still seem to define our stiff-necked ancestors.  Yah however, continues to be merciful and graceful.  He is patiently unrelenting in His instruction of His newborn nation. Geographically we know we are getting closer to Sinai, as the rock we are camped around is known as the ‘Rock of Horeb’.

Moses is told to take his miracle working staff, the same one that made water turn to blood, and strike the Rock. Water comes from the Rock and the people’s thirst is satisfied. It turns out, not surprisingly at this point, that the Hebrew word for ‘rock’ here is very unique:  Tzoor (Strongs H6697) (spelled tzade, waw (or vav), resh.)  We are revisiting the Tzade (righteousness) symbolism from the last time the people grumbled about a lack of water! Back at Marah, we discussed the healing power of Tzade, and how we were being subtly taught about His righteousness being the cure for our bitterness.

It turns out that we don’t have to guess who this ‘Tzoor’ is, as Paul tells us:

It seems that there are a few Hebrew words translated into English as ‘rock’, but this particular word is singled out as a Messianic symbol, and it’s a really, really, really, important one.  (It’s why I keep capitalizing it).

Here are famous Messianic prophecies that are all rooted in the Tzoor introduced here for the first time in Rephadim:

“Then YHWH said, “Behold, there is a place by Me, and you shall stand there on the Rock; and it will come about, while My glory is passing by, that I will put you in the cleft of the Rock and cover you with My hand until I have passed by.”  Exodus 33:21-22

“How shall I curse whom God has not cursed? And how can I denounce whom YHWH has not denounced? “As I see him from the top of the Rock, and I look at him from the hills; Behold, a people who dwells apart, and will not be reckoned among the nations. “Who can count the dust of Jacob, or number the fourth part of Israel? Let me die the death of the upright, and let my end be like his!” (Numbers 23:8-10)

“The Rock!  His work is perfect, for all His ways are just; A God of faithfulness and without injustice, righteous and upright is He.” (Deuteronomy 32:4)  (‘The Song of Moses’ in Deuteronomy 32 is FULL of ‘Tzoor’)

“Then He shall become a sanctuary; but to both the houses of Israel, a stone to strike and a Rock to stumble over, and a snare and a trap for the inhabitants of Jerusalem. Many will stumble over them, then they will fall and be broken; they will even be snared and caught.” (Isaiah 8:14-15)  (Romans 9:33)  (1 Peter 2:8)

Messiah has been with us through this journey first as the Pesach Lamb in Egypt, then revealed as our Righteousness at Marah, then both as our Manna and Lord of the Sabbath, and now as the Rock at Rephadim.  Yah is teaching us with every step, that we can’t truly know or have access to the Father, without an intimate trusting relationship with Yeshua, the Son.  However, just like the first Israelites, we are learning that this relationship doesn’t have to be on a first-name basis—the attributes of Messiah still define the Way, whether we or articulate the name “Yeshua” or even “Jesus” with our lips or not.

Even if our fellow redeemed brothers and sisters have never heard of Shavuot, we are all still on the Way.  We all still rely on Messiah to push us forward by drawing us near.   However, seeing Messiah in the Torah confirms that we are indeed using the right map!